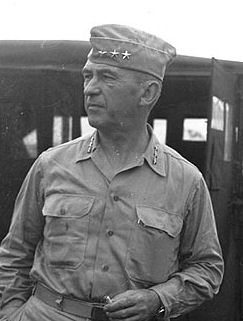 The Mediadise Article of The Day for January 26, 2020 is: Walter Krueger.
Walter Krueger (26 January 1881 – 20 August 1967) was an American soldier who commanded the Sixth United States Army in the South West Pacific Area during World War II, rising from private to general in his army career. A child immigrant born in Flatow, West Prussia, he served in the Spanish–American War and the Philippine–American War and was promoted to second lieutenant in 1901. When the U.S. entered World War I in 1917, he was assigned to the 84th Infantry Division as assistant chief of staff, later as chief of staff. In October 1918, he commanded the Tank Corps. Between the wars, he served in various roles, and in 1941 he assumed command of the Third Army. In 1943 he was sent to the Southwest Pacific Area as commander of the Sixth Army, which he led in a series of victorious campaigns against the Japanese. In the Battle of Luzon in 1945 he was finally able to maneuver his army as he had in 1941 against a Japanese army under Tomoyuki Yamashita.
Part of the Command in the South West Pacific Area featured topic.