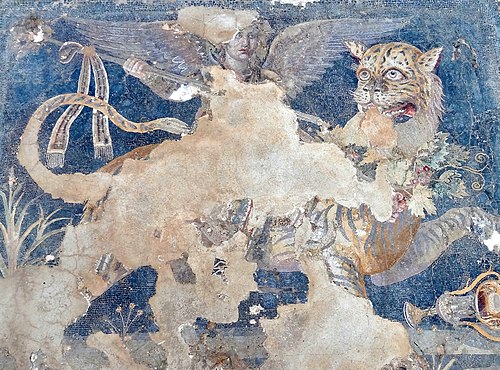 The Mediadise Article of The Day for February 5, 2020 is: Mosaics of Delos.
The mosaics of Delos are a significant body of ancient Greek mosaic art. Most of the surviving mosaics from Delos, Greece, an island in the Cyclades, date to the last half of the 2nd century BC and early 1st century BC, during the Hellenistic period and beginning of the Roman period. About half of all surviving tessellated mosaics from Hellenistic Greece come from Delos. The paved walkways of Delos range from simple pebble or chip-pavement constructions to elaborate mosaic floors composed of tesserae. Most motifs contain simple geometric patterns, while a handful utilize the opus tessellatum and opus vermiculatum techniques to create lucid, naturalistic, and richly colored scenes and figures. Mosaics have been found in places of worship, public buildings, and private homes. They share characteristics with those in other parts of the Greek world, such as Macedonian mosaics in Pella. They often employ a black-background technique as seen in the red-figure pottery of the Classical period.